Every body from Liz Erber on Vimeo.

Every Body, a dance performance in experiential anatomy: We all possess a body but for most people it is not so often that one thinks about the contents, structure, function, or anatomy of this body (not at least, until something goes wrong or something stops functioning properly...we are not going to go there.) In this performance we bring attention to the body each of us is inhabiting, and invite audience members to tune in to the experience of their body through focus, touch and movement. In this way we bring attention not only to the outer performance space that we the performers are inhabiting, but the vast inner space of each and every individual. Every Body is a performance of anatomy and anatomical function (i.e Breath, circulation, fascia.) It is a performance of connecting anatomies expressed through dance, sound and words. Andrew and Liz connect with one another and directly with the audience.

I offer you...
A duet by and with Liz Erber and Andrew Wass23. April 2014Social Muscle ClubSophiensaele, Kantine, Berlin

I Offer You - Social Muscle Club, Berlin from Liz Erber on Vimeo.

Tip of the Iceberg: the story of an American obsession - Trailer from Liz Erber on Vimeo.

Tip of the Iceberg is a multi-media play, with an absurdist and darkly humorous look at modern American life. Through text, movement, video and music we glimpse into the lives of three individuals, who are seemingly trapped by their own limited views of the world. One individual, WOMAN, is attempting to dream her way out. Central to our characters' lives is the story of Iceberg lettuce - a story of modern American food (exported to the world), monoculture, marketing, modern economic colonialism, and more. Juxtaposed to this fictional story is the current reality of the actors' lives in Berlin. 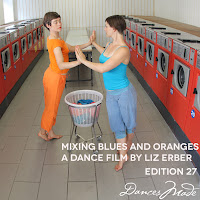 I am proud to have been one of three featured artists for the August 2013 Edition of the online film festival Dances Made to Order, and proud to have been sharing the electronic online stage with two accomplished artists: Alfredo Salomón from Mexico and Laura Karlin and Sofia Klass from Invertigo Dance Theatre of Los Angeles.

Mixing Blues and Oranges is a romantic physical comedy based on the given themes: a quarrel between lovers and be inspired by odd numbers.

This is a 30 second trailer. You can view the full film, as well as the films from Alfredo Salomón and Laura Karlin, by making a donation to the artists here: https://dancesmadetoorder.com/login/ . Mixing Blues & Oranges (an excerpt) from Dances Made to Order on Vimeo.
Watch these films from anywhere at anytime from your computer or favorite mobile device. Your contribution goes back to the artists to support their work.

CHORO CORPORA has also been performed at K77 Studio and ada Studio.  Special thanks to both for their support.


Into the Deep began as an investigation of spine—our ancient vertebral backbone—
undulation (fluid wave movement), and evolution. By fully exploring the movement
possibilities of the spine, we connect to the physical possibilities passed down to us through a
long line of evolutionary history. It is a tearing away of human culture, to reveal kinetic
meaning and the memory of cell, bone, blood.

From the Deep Blue Sea from Liz Erber on Vimeo.


Collective Memory is an investigation into how the history of the Holocaust lives inside of us
today. Jews and non-Jews, Germans and non-Germans were involved in the project.


Holocaust Project: The Collective Memory from Liz Erber on Vimeo.


Messy Times was a commission from Velocity Dance Center for their annual Bridge Project.
Three choreographers are selected and matched with dancers. The choreographers have 13
days of rehearsal during a 3-week period (39 hours total).