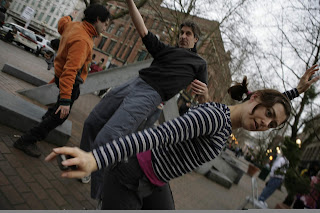 Liz Erber is a dance artist and educator, with a background in dance, theater and music, who has been living in Berlin since 2008. She was born and raised in the United States. As a young child she took a variety of dance and acrobatic classes, and from the age of 8, trained intensively as a competitive gymnast and violinist. As an adult Liz developed a deep passion for dance and has studied many different styles, including contemporary/modern dance, ballet, contact improvisation, creative dance, composition/ choreography, break dance, capoeira Angola (Brazilian dance and martial art), Brazilian folkloric dance, as well as various soma and release techniques (i.e. Alexander, Skinner, Klein). In 2005 Liz earned a double bachelor's degree in dance and drama from the University of Washington, and in this same year she completed a semester-long internship with Anne Green Gilbert at the Creative Dance Center in Seattle. (In 2004 she completed the Creative Dance Center’s teacher training.) Since that time she has taught children and adult classes in creative dance, capoeira angola, modern dance, contact improvisation, and tumbling. From 2006-2008 she was on faculty at Momentum Music and Dance Academy in Seattle, and taught children's classes at public schools for Phffft! Dance Theater Company, Arts Corps, and Nature Consortium. Liz’s choreography and original works have been commissioned by 4Culture, the Duvall Cultural Commission, Velocity Dance Center, Book-It Repertory Theater, amongst others. In addition, she has shown her work at multiple venues throughout Seattle, Berlin/Brandenburg and in Brazil. Liz had choreographic residencies at K77 Studio in Berlin in the spring and fall of 2011. In May and November of that year she presented new choreographic works November at the studio, and also at ada Studio in Berlin.